You are currently browsing the faunal archives of Musings.

As we were leaving the dining room, these wispy clouds came in, I think generated by the sun hitting the air. Cool, cool morning. Frost on the windshield cool.

With a big, hot breakfast on board we headed out down the trail to The Window of last night’s sunset photograph.

Here’s the mountain face to our right, to the north, as we began our descent.

Look at that! A Mexican jay.

You can tell it’s chilly…and windy. I have my coat on over three layers and am glad I can stuff my hands in my pockets. Yes, I have on a windproof neck buff, ear band, and a baseball cap—all of them. That’s the left or southwest wall of the Chisos Basin behind me.

That gap is the Window that we’re descending toward. That’s the desiccating blossom stalk of a Havard agave, if I remember right.

Detail of a boulder we had to go around. It looks different than most of the other rocks around this immediate area.

Lookee over there! Way over there, thankfully…long lens…a trio of bears, perhaps a mom and two cubs. They were way up on the slope to our left and pretty far away and not interested in us. Whew.

Getting closer to the window. Are those clouds coming in? I promised the Guru we had to go early so we wouldn’t be out in the heat of the day…but where’s the heat???? 😉

We trekked carefully past a spring and crossed the water several times to work our way down to finally view through the Window! Vista found! Now, time to ascend. Glad it’s cool finally, but not looking forward to headwind through canyon above Window.

Here’s the spring water, and the trail-builders worked hard to make steps in the bedrock to make hikers safer. 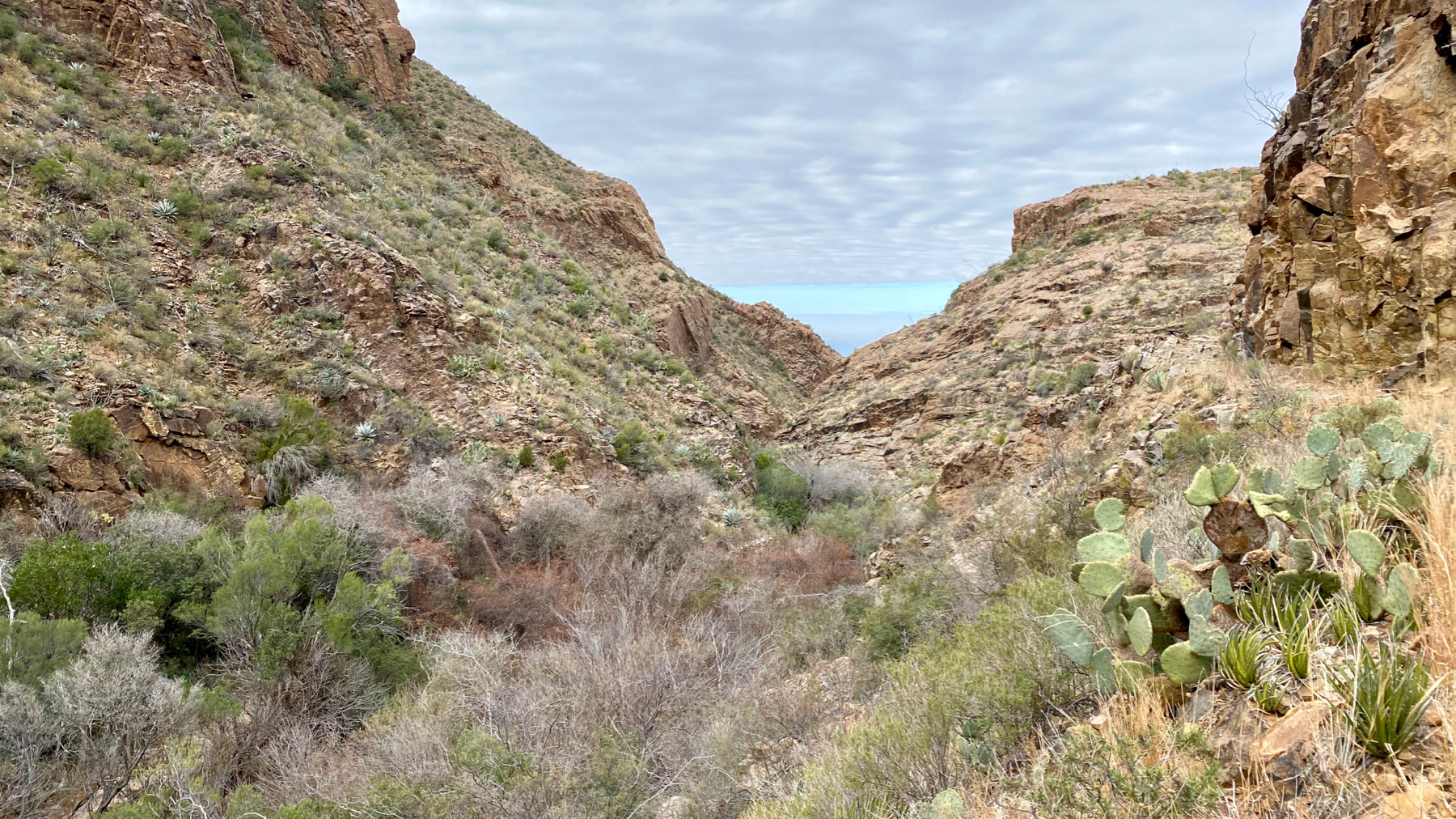 Took a side path for a short distance for another view out the Window. From here you can hardly tell how deep the canyon is.

We got out just fine, took a lunch break, then headed out in the pickup. Here’s the Rio Grande/Rio Bravo from hear a hot springs. I know this cane as carrizo from my time in Oaxaca. Yes, that’s Mexico on the other side, so let’s all call it carrizo, or car-ee-so.

Driving along, making our way back to the turn that will take us back into the Chisos Basin for the night, we found this coyote by the road.

I’ll take this as a goodnight from our patron peak, Casa Grande, right above our modest room. I’m sure all the rooms here are modest. The bling is in the views. And the critter sightings.

Billy the Kid was incarcerated here at the combo courthouse/jail in Lincoln County, New Mexico, in 1881. He managed to escape, and was murdered by a “friend” about ten weeks later.

That gap is Capitán Gap. It’s where a singed bear cub was found in 1950. He soon was named Smokey the Bear. And the rest was history.

Saw feeding sandhills by the dozen, plus ducks and geese of various sorts at Bosque del Apache, in the Rio Grande valley. We didn’t ask officials about this strange dark coloration; that creature clearly had the red details on the head, however.

We did enjoy the arboretum etc walk by the Bosque visitor center. I will spare you from any more of the dozens of photos we shot there.

Stopped at the Harvey House Museum in Belen. Businesses all around the area each sponsored the decorating of a tree or a room. It was great to see the community support, but I found it difficult to imagine this as the dining room back when it was a Harvey House. The waitresses had rooms upstairs.

Special night at the Indian Pueblo Cultural Center in Albuquerque. We got to see the Apache Dancers and hear their caller/singer, who also drummed. How special. This was the before-dark performance.

The second, after-dark performance was super-charged. The fire made a huge difference. We got ashes from the fire afterward to keep with us in the pickup for good luck, as directed by the chanter, along with most of the folks who stayed until the end (cold, about 40°F, brr). Actually, these are religious and spiritual events, not presentations or performances. I liked that.

This entry might have been better titled “Hinge points,” but I couldn’t resist “Swing nose frog.” It refers to a particular switcher set-up for rails. Thank you, Harvey House.

Turns out our word bayou is from a Frenchified Native American word. Most I’ve seen are like this—dredged and channelized.

Photographically, the high point was a morning walk in a wildlife preserve also known as a swamp. Lots of Spanish moss but no Spanish.

The trail took us back to open water—a lake? This bird kept its distance yet still was curious about us. Snowy egret. 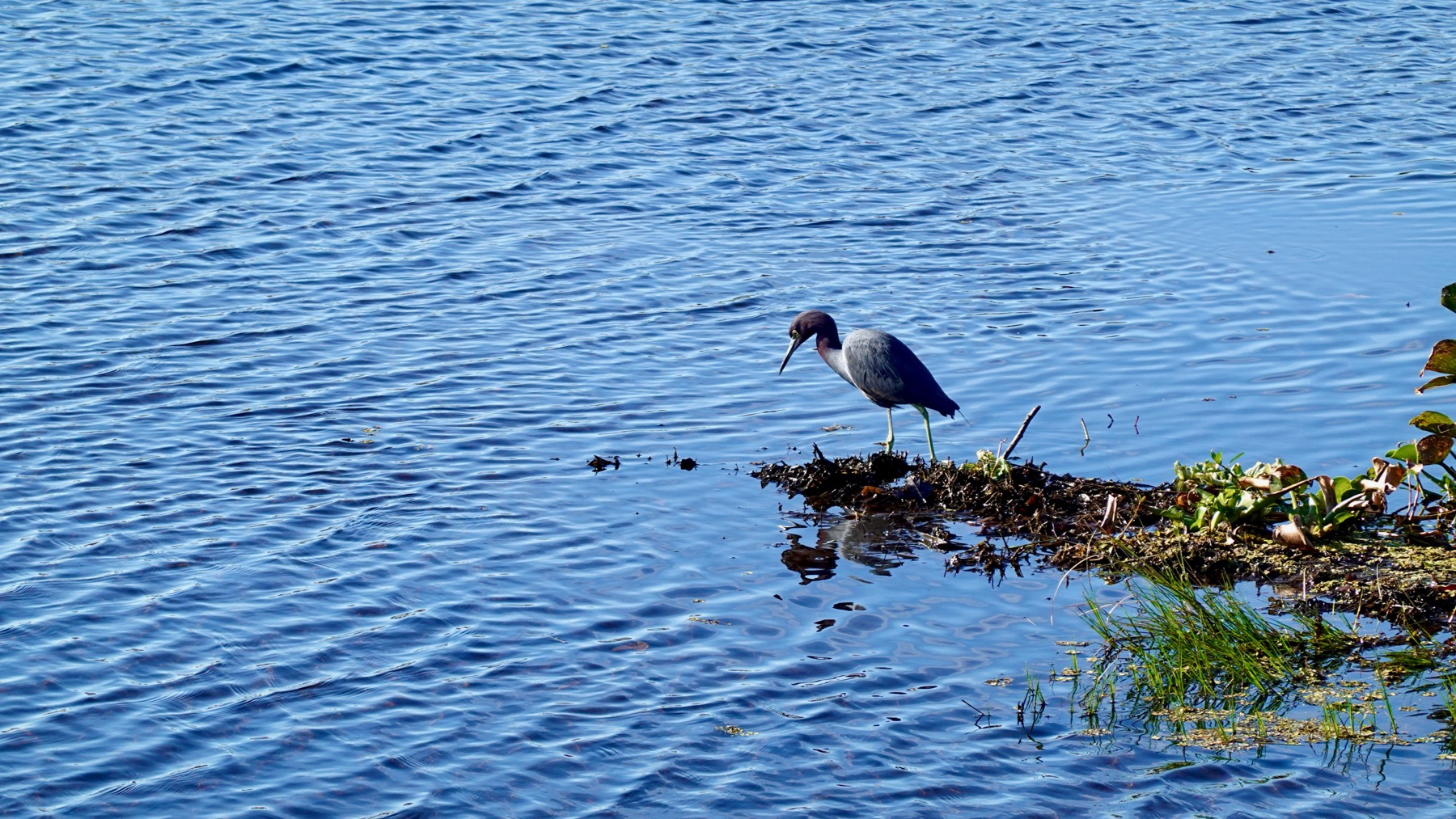 Closer was this little blue heron, busy hunting and mostly ignoring us.

Back on the road we drove through an area with lots of ship-building, which appeared to be roadside but was really in nearby channels.

Later we got into a cane-growing zone. It is harvest season and a few guys and many machines were active. Lots of trailers, full and empty, moved the chopped plant material to…to…I assume presses?

Many bridges, a few high enough for ships to pass.

Much later we were in a traffic jam (no alternative routes), and the Guru made a new friend. Kinda.

And another spectacular sunset. Life is darned good. We sleep in Texas tonight. [Those two sentences not logically connected.]

Posted at 6:22 PM | Comments Off on Bayou territory glimpses

My dad, the Botanist, called these, as I recall, Georgia bugs, meaning he saw them here and did not associate them with the Midwest. This one hung around the back door this afternoon, but was not admitted to our early T-giving. We had a good harvest this year, albeit from assorted grocery stores.

Posted at 6:03 PM | Comments Off on Entomological moments

Puzzle of the day: parse the flags.

Here’s a clue: Canadian fall color [some spots were even more autumnal].

We saw many buggy-icon signs, and could see the shoulder was well-used (and, umhem, decorative road apples), and finally we spotted buggies. The first two each had a lone woman, wearing a large black tightly tied scarf. This one was a pair of beard-guys. The fourth was a solo beard-guy. No kids, but I’m guessing there were dozens at home! [Perhaps I exaggerate.]

Posted at 7:30 PM | Comments Off on Change of scenery

A tractor is pretty darned bucolic. In the modern industrial sense.

Grapes…still green and still not eaten by the birds. In my experience, avian beings eat grapes, cherries, whatever, about three hours before I figure out they’re ripe.

You’re forgiven if you think these are Canada geese. Nope: sandhill cranes.

Posted at 10:48 PM | Comments Off on Bucolic moments

Both this Queen Anne’s lace and the chicory are not native to North America, but are now naturalized. Root also edible. This is closely related to carrots.

Squint at the dots in the field right and rear of the low, green outbuilding. I think six adult deer and one youngster—our local herd….

Subsequently, it cleared and became sunny for the late afternoon…yay!

Posted at 9:53 PM | Comments Off on Local pretties

By the toes, I’m guessing: tree frog. But I think of tree frogs as green—my ignorance, I’m sure (and the amphibian ID book is at our first home, not here). I can use that rural CYA naming strategy, and call it a toad-frog?

That’s lush for a lichen. If I form a band (ha!), I’m thinking Lush Lichen will be on the short list for a name. Along with Illusion of Symmetry.

Posted at 7:20 PM | Comments Off on Naming/not naming

Yup. That was today’s expotition (intentional misspelling, in the style of KayakWoman). At the parking lot at the mouth of Hurricane River, we were cheered on by glorious clusters of mountain ash berries/fruit/redness.

We zipped on foot along the coast path a bit over a mile, then down these steps to…

…head along this beach to our destination. The lake is so high the remains are almost totally underwater (to my left and slightly ahead of me). Warm today, so not bad for getting into the waters of Gitchee Gumee, despite what you may be thinking. I did snorkel a loop out around the wooden ship-carcass, so can officially check “snorkel in Lake Superior” off my bucket list. [Turns out, I’d rather not have waves breaking on me when I’m snorkeling.]

Welcoming us home: this pair of sandhills, which prefer fields to the north of us, but sometimes visit our property—pretty sure it’s the same pair.

Posted at 5:55 PM | Comments Off on Snorkel a shipwreck